From The Depths Of Ambition, Den Sorte Skole Send Out A Monstrous Cry For Plurality In Music 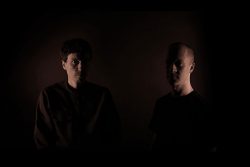 The Orchard and Phonofile celebrate Den Sorte Skole as they gear up for the electronic duo’s performance at Roskilde, tonight at 01.15 at the Orange Stage. The following guest post by Jonas Sølberg describes the history and complexities behind the Danish artists.

It’s not us who have set all this in motion. It’s Den Sorte Skole. It has a life and ambition of its own.

A noisy and gritty sound cuts through the air as I leave the freight elevator and enter the fifth floor of an old warehouse. In front of a big electronic setup, Martin Højland is sitting by a big screen filled with chopped samples.

Together with Simon Dokkedal, Martin Højland is part of the electronic duo Den Sorte Skole – The Black School in Danish. When I meet Højland, the two artists are only days away from one of their biggest and most ambitious concerts ever, filling up the massive Orange Stage at Roskilde Festival.

They have been at the festival five times before and played fully packed concerts each time. Their parties at the Roskilde Festival’s skate venue back in 2006 and 2008 – when they were more of a turntablist and hip-hop inspired electronic act – undoubtedly felt like big street parties filled with drunk, happy, stoned, pushing, dancing kids grooving and singing along. The concert in 2008 still gets tossed around between my more nostalgic friends.

Højland and his music partner Simon Dokkedal are in a different place now. No longer as fascinated by hiphop, their music has grown more complex. Today it is not as much songs they create as it is organic, pulsating and psychedelic compositions built around beats and samples from the entire world of music. From folk and indian music to club and urban music. Melancholic, sad and happy instruments and voices spanning generations, language, religion, genres and all those other worn out identity markers. Up until now, the duo’s most complex sound embroidery has been their fourth studio album ‘Indians & Cowboys’ from 2015 where they added a monstrous and almost grotesque face to their sound, a dark style they have honed and dug into deeper ever since.

A big studio window is looking out on a green and quiet Danish neighbourhood with red brick villas. A pretty and sweet tasting slice of Danish neatness. Inside the studio, the disorderly noise has been replaced with beautiful choirs singing in an infinite ambient space. A couple of floating seconds on a busy day.

They are finally starting to finish the music for the concert, Højland says before excusing himself as he moves back to the computer putting it to work. No time to rest. With the music for the concert done, the week is filled with long production rehearsals: 12-hour-days where every little detail will be tested and rehearsed for the 1 hour and 40-minute show. The entire show will include almost a hundred people, counting the 20-person Icelandic choir Staka, expansive visuals and lighting, ten dancers and 9 invited guest artists – among them the Syrian dabke-gone-techno artist Omar Souleyman and the Kurd singer and megastar Aynur Doğan who has for more than ten years been a thorn in the eyes of the nationalist Turkish government. The only Dane among the nine guests is SØS Gunver Ryberg, an industrial techno artist not yet known by many Danes.

Ambition. That’s what is dripping from the ceiling in the studio down onto the cables, racks and computers competing for space around Højland. On the wall is a big production plan which acts as a constant reminder of the coming week’s intense rehearsals. Ambition is also what is carving into Martin’s temples. From designing the dancers suits to giving their view on how the lighting and visuals would best live and breath with the music Højland and Dokkedal’s visions are seeping into every artistic decision. >>It’s not us who have set all this in motion. It’s Den Sorte Skole. It has a life and ambition of its own. We have already had more than 10 meetings with the visual crew at this point. That’s 40 hours talking about visuals and lighting. But we want to be part of everything.<<

Ambition is also what is forcing his head into his hands in an unconscious gesture every ten minutes. “I’m glad I have my two sons at home. They provide a bit of normalcy in a crazy routine these days. But it’s always like this when we’re nearing a deadline on our big projects with classical orchestras or some other big setup.”

“It’s pretty nerve-wracking. It’s within this last month and a half we have found the path and vision for the entire show. That has calmed us both a bit. Before that, everything was still very much up in the air. We’ve been working full time on this for a half year so I’m starting to feel pretty squeezed.”

Looking at the production plan all big and precise stretching a couple meters with names, places and times weaving in and out of each other, you understand why Martin is a bit squeezed. Connecting all these dots is not far from weaving a Persian carpet. Every little, new stitch depends on the prior one. It’s also the way they create their music. Slowly weaving and connecting. The duo’s most complex broidery yet was Indians & Cowboys from 2015 building on the sound they started with their third album ‘Lektion III’. The show on Orange Stage will build further on the legacy of those albums.

“This whole process has been like creating a new album. 70 percent of the samples in the concert are new material so we’ve sort of started over,” Højland says. “We’ve always had this rule that we didn’t use any samples released after we were born. This gave us what some have called a slightly dated and organic 70’s sound. Around the time of the Danish SPOT Festival in 2016, we had created this really heavy and rough set, that we ended up enjoying a lot and we began digging deeper into that feeling.”

Like a 30-story techno monster, they ploughed through their audiences at that concert and trampled on anything reminiscent of the pop, soul and RnB that seemingly was the sound of “now” at SPOT in 2016. Experiencing that concert, I was blown away by the brutal heaviness and total bombardment of the senses. I was impressed by their willingness to risk alienating their fans while exploring deep into the gritty and dirty niches of underground club music. Since then they have used a lot of time digging into contemporary music instead of only older vinyl releases. Inspiration from new and progressive electronic artists like Roly Porter, Arca and Paul Jebanasam has helped stretch their sound into the rough and splintered. Into a post-industrial and dark ambient landscape.

“We have decided to create a concert without compromise which is pretty nerve-wracking. It’s going to be the ultimate trip and a grotesque, dark journey.” Martin says. “It could end up not going our way if we’re just a bit unlucky: Rain pouring down, technical issues or any misstep somewhere in the production. It could be too deep and too different,” he contemplates and tells me that he already has read all the bad reviews in his mind: ‘Confused circus on Orange Stage’, or something in that direction,” he recites smiling a little. “In the end, we have to put our faith in the contract we have with our fans. They know we are not only a groovy duo and have given us room and space to evolve – a thing we could never stop doing anyway – and in exchange, they can also trust us to approach them in our music. Good music is about exploring while also being able to connect. That’s what we have always strived to do. And we are hoping the sum of the parts in our concert will suit a late night slot and the liquid state people are in after three days of festival.”

Let the music speak for you

The space in front of Orange Stage can fit more than 60.000 people. It is a big canvas they are filling out – and they know it. It is also part of the reason for those big ambitions.

I ask Højland if they have talked about using the stage for a political statement. They have been known to utter their critique of unjust power. The symbolism in the album title ‘Indians & Cowboys’ points to their willingness to critique and discuss colonialism.

“But the interesting thing isn’t what we have to say about the refugee crisis in interviews. What matters is what our music says and conveys. We are inherently political in our music. That’s why we have chosen an international and alternative guest lineup. It’s our crème de la crème picks. Omar Souleyman is not joining because there’s war in Syria. He’s here because his music should definitely be heard and the same goes for the rest of the artists.

“There’s enough unambitious music in Denmark as it is. We are investing all of our ambition in creating a manifestation of musical openness and plurality, that reflects the world.”

A show like this takes a toll on artists, and especially artists working outside the mainstream. It is a huge opportunity, but also a big expenditure. Martin explains how the sponsorship they have received from Phonofile and The Orchard have made some aspects of the show possible that otherwise would have needed to be cut from the show. “The money secured the project at a critical time. We have been very ambitious about everything, but a show like this costs a lot of money, so the sponsorship made it possible for us to focus on the show, rather than worrying about the financial aspects.” “We can identify with Phonofile’s values and business model – creating a system that gives us the opportunity to control our own releases and the knowledge of our own fans.”