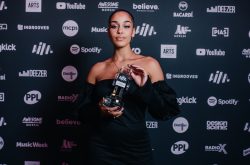 The 8th annual AIM Independent Music Awards were held Tuesday, September 4 at The Brewery in London. Each year this event honors the brightest independent talents across the UK.

We had to give a shoutout to 21-year-old singer-songwriter Jorja Smith for winning UK Breakthrough of the Year during the evening’s awards ceremony. Shortlisted for Independent Album of the Year and PPL Award for Most Played New Independent Act, Jorja released her critically acclaimed debut album Lost & Found earlier this summer, charting in 14 countries. The soulful rising artist, who wrote her first song at 11, was recently profiled in Vanity Fair and doesn’t categorize her music as anything other than “Jorja.” She must be making room on her shelves because just a few days later Jorja won the Vero Breakthrough Solo Artist Award at the GQ Men of the Year Awards. Congrats on major wins, Jorja! We can’t wait to see what’s next.

Each year the AIM Independent Music Awards bring together the industry’s leading professionals who are dedicated to empowering the independent music community.

Check out the full list of this year’s AIM Award winners here.