Out Today by The Orchard: Sharon Jones & the Dap-Kings, Hoops & More 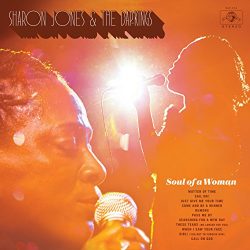 You may not be hearing from us as much next week as we spend time with family or maxing out our credit cards in the spirit of Black Friday. Nevertheless, we have a few masterful releases that are sure to keep you jamming. This week we pay tribute to a beautiful and vivacious artist along with her familial band in an album of unreleased magic, a talented and simplistic indie lo-fi album and a Latin album that will get you grooving, all out today.

There was no such thing as slowing down in the eyes of Sharon Jones. The late singer left this world last year but not without making the absolute most of her last moments. From wildly energetic performances on the road to recording her next album, Jones lived her final time to the fullest with the Dap-Kings at her side. The contagiously vibrant performer lives on through her posthumous release aptly titled Soul Of A Woman. Because she was surely one hell of a woman with a whole lot of soul. Her light shines through the new album, taking the classic feel of 60’s and 70’s R&B and injecting it’s own authentic spirit. Listen to ‘Matter of Time’ below and find the full album here.

Originally picking up fans by releasing their music on YouTube, Hoops is bringing their stripped down melodies to streaming services everywhere by way of Fat Possum. The murky rock group based out of Indiana sites influences including Brit-rockers Prefab Sprout and the Clientele. Every song on Tape #1 is different but still creates the same dreamy sensation that will have you drifting to another world. The group has been listed with just about every indie genre description from shoegaze to dream pop, ’80s college rock and even yacht rock (we’re getting awfully specific nowadays huh?). Alas, you never truly know what a band sounds like until you listen for yourself. Check out Hoops below and listen to the full album here or get the full package of Tapes #1-3, out now.

Los Pescadores Del Rio Conchos will get you dancing in no time with their latest release Al Mismo Nivel from Azteca Music Group. The talented group sticks true to their traditional Norteño Mexican sound with help of saxophone, banjo and even an accordion. Their lyrical story telling contrasts with their lighthearted and upbeat feel resembling their own twist on Latin folk music. One thing is clear, this album is made to get the party started with norteño polka, huapangos, waltzes and covers of hits from mega artists Selena, Los Reyes Locos and Banda Machos. Listen below for a song off Al Mismo Nivel and get the album here.