Out Today by The Orchard: OMD, Steve Winwood & More 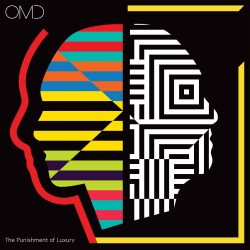 We’ve got one more long weekend before the long hall to Thanksgiving. We hope you enjoy yourselves wherever you are This Labour Day. This weeks releases from The Orchard include one of the all-time greats of new wave returning with another incredible album, a best of project capturing the greatest hits of one of the most talented singers of all time, and uplifting pop-punk tunes with a heavy twist.

To start of this weekend the world renowned group known by the unique moniker Orchestral Manoeuvres In The Dark (or OMD) is back with a brand new album called The Punishment of Luxury. The duo takes their signature sound that has made them a household name since the 80’s and combines it with modernized themes and messages. OMD focuses on the terrifying consumption levels of society today and the devastative repercussions of humanities actions. From the shift in the way people converse on the new track “Isotype” to the difference in standards of happiness, this step back perspective album is a unique commentary on modern human behavior. Listen to the album here and watch music video for the title track “The Punishment of Luxury” below.

Having had massive success both in groups of his own and as a collaborator with artists like Jimi Hendrix and Eric Clapton, the incredible Steve Winwood is back with Winwood Greatest Hits Live. The famed singer has earned eleven Grammy nominations, 2 wins and was even placed between Bono and Whitney Houston on Rolling Stones “100 Greatest Singer of All Time” list. His first album in nearly a decade, this collection of tracks is straight from Steve’s personal collection of live performances and comes together as a classic summary of his history in music. Featuring fan favorites such as “Higher Love” and “Roll With It,” the album is sure to be a hit with long time fans and a great introduction for new listeners. You can listen to his track “Higher Love” below and check out the full album here.

To top of our releases is a punk album from Across the Atlantic titled, Works of Progress. This fast-paced post-hardcore project combines inspired lyrics and powerful instrumentation with just enough screaming to resonate with fans that favor the heavier sounds. Coming from the amazing team at SharpTone, the album is the exact release that easycore fans didn’t know they needed. You can check out the video for “Sundress Funeral” below and be sure to listen to the full album here.