Out Today by The Orchard: Nick Cannon, Juiceboxxx & More 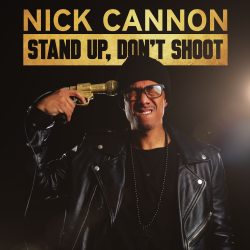 June and July have come and gone leaving us at The Orchard questioning how summer is flying by so fast. The hot months are something we never seem to really appreciate till we see fall and winter just a few calendar pages away. Luckily for all of us we still have one more month to enjoy the sun along with a handful of incredible new releases. This Friday brings the release of some hilarious stand up from one of comedies biggest, an inspiration punk rap album guaranteed to get listeners fired up and a documentary from Anthony Bourdain on one of cuisine’s most revered and mysterious chefs.

Known worldwide for his showmanship, flair for the dramatic and comedic talents, Nick Cannon is a star who brings laughter wherever he goes. His new special Stand Up, Don’t Shoot is out this weekend for all to listen as Nick voices his comedic take on serious issues like the Black Lives Matter movement, Obama’s first meeting with Trump following the election and his personal encounter with thuggish kangaroos. Cannon’s unique approach to often tense subjects breaks down barriers and brings smiles to everyone’s faces as he provides an hour of nothing but laughs. Take a listen to Stand Up, Don’t Shoot here.

Channeling the inner feelings of youths all around the country, Wisconsin based rapper Juiceboxxx releases his latest album Freaked Out American Loser today. Blending punk rock with rap in a style that is not so distant from Beastie Boys, this emerging artist’s expression on the absurdities of life is a 30 minute roller coaster of emotion all focused on one thing: continuing to move forward. Brought to us by Dangerbird Records, this album is a pump-up punk-rap inspirational slap to the face that will get listeners amped up and ready to move. You can check out Juiceboxxx’s track “Guts and Tension” below and pick up Freaked Out American Loser here.

American culinary pioneer Jeremiah Tower was one of the greatest chef’s in the world, flipping the food industry on its head during his stay at institutions like Chez Panisse and Stars, until at the height of his fame he vanished without a trace. Jeremiah Tower: The Last Magnificent, executive produced by renowned wild card Anthony Bourdain, looks at the true story behind the epic journey of this cuisine legend’s rise, disappearance and rebirth. Considered “a father of American cuisine” by Martha Stewart and many others, this showcase of an often overlooked master brings to light a new side of the food world that has previously been unexplored, taking viewers on an incredible journey through taste and time. A trailer of this culinary adventure can be seen below and catch the full film here.