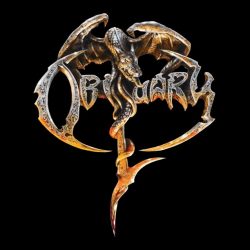 Welcome to the second installment of The Orchard’s weekly Out Now series, where we break down a few new releases in music & film. This week, we’re going to span from metal, to pop, to a little standup comedy. Prepare to head bang, hum along and laugh out loud.

Florida metal legends and self-declared “cavemen of metal” Obituary roared back to life this week with a self-titled record. Obituary, the band’s tenth record, is a mix of old school hardcore and kickass rock & roll that fans love them for. In self-titled fashion, Obituary comes from the core, exploring the band’s history and exposing their rock solid foundation in a culmination of 10 tracks. Check out “A Lesson In Vengeance” and get the album here.

Also out today is a new LP from singer/songwriter Becca Stevens. Her new record Regina is a powerful album built on emotional pull, strong societal critiques and widely empowering messages. The production compliments her vocal work pristinely, as you can hear from the “Queen Mab” video below. The fuzzed out bass and percussive smacks are as intense and wholesome as the video. If you like what you hear, you can grab the album here.

Rounding out this week is a live performance record from standup comedian Mike Finoia. Part of massive comedy label Comedy Dynamics, Finoia is the kind of standup comedian that seems like he could become your best friend in five minutes. His style is approachable, stories are universally appealing and his punchlines are just right. Get a taste with a clip of his Gotham Comedy Club gig below. His new album, however, was recorded at a live performance in Burlington, VT (hence it’s name, Live In Burlington).

That’s it for this week, check out some other great streams below.

Mount Eerie: A Crow Looked At Me album stream via NPR Music
Album out now via P.W. Elverum & Sun

CHINAH: Hints EP stream via Pigeons & Planes
EP out now on No3

Raul Midón: “Pedal to the Metal” track premiere via People
Bad Ass and Blind out March 24 on Mack Avenue Records

Sentient Moss: “1999 In Columbia” track premiere via The Hook
Somebody, Somehow out March 30 via Good Friend Records

Slothrust: “Sleep Eater” video premiere via Clash
Everyone Else out now on Dangerbird Records

Hideout: “See You Around” video premiere via Northern Transmissions
So Many Hoops/So Little Time out now via Small Plates

Spotify Softens Stance on Windowing New Music In Exchange For Lower Royalty Rates APPLE MUSIC ESTIMATED TO BE 10% OF APPLE’S SERVICES REVENUES Vevo aims for more traction with Watch Party, a chatroom for queuing, watching videos NPR Ratings at All-...