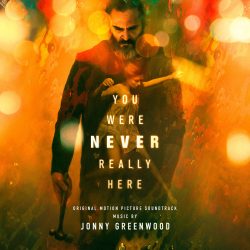 As the music industry gears up for a week in the Austin sunshine, we’ve prepared a great selection of new albums to entertain you on your travels. Brush up on some talented artists and maybe even find them among the variety of venues and watering holes at SXSW. Add these new releases to your playlist, including records from Radiohead’s Jonny Greenwood, The Strokes’ Albert Hammond Jr. and psych-punk quartet Acid Dad, and be the coolest kid on Sixth Street!

While we are still trying to come down from Jonny Greenwood’s Oscar nominated original score for Phantom Thread, the Radiohead guitarist has released yet another dazzling soundtrack for Lynne Ramsay’s thriller You Were Never Really Here. The soundtrack presented by Lakeshore Records features violent strings from London Contemporary Orchestra accompanied by Greenwood’s electric guitar. The soundtrack portrays great musicianship that evokes dark sentiments by itself leading us to wonder how incredible it could be once accompanied by the film. Greenwood spoke to NME, saying “Music’s a pretty great resource to have: you’re looking for the moments when the film and score combine to make something greater than the sum of their parts – to make both element better than they would be on their own. Sometimes it happens…” You Were Never Really Here starring Joaquin Phoenix arrives to theaters on April 6 and a physical release of the album is expected to follow soon. Listen to the synth heavy track “Dark Streets” below and access the full digital soundtrack here to feel goose bumps.

Albert Hammond Jr.’s fourth studio album Francis Trouble is dedicated to Hammond’s twin, Francis, who he never got a chance to see. In November 1979, Albert Hammond Sr. rushed Claudia Fernandez to the hospital where they were told Claudia had a miscarriage. It was not until 6 months into the pregnancy when the couple realized that Albert Hammond Jr. was holding onto his life in his mother’s womb. The Strokes guitarist learned when he was 36 years old that Francis’ fingernail stayed in the womb until Hammond’s birth. 36 became an important number for Hammond that also reflected to Francis Trouble. The 36 minute long album released by Red Bull Records presents a fresh take on garage rock while still holding onto the established tonal elements of the genre with its melodic guitars and untamed vocals. Check his recent performance on The Late Late Show with James Corden below and dig into the full album here.

Brooklyn based psychedelic rock band Acid Dad releases their self-titled debut via Greenway Records following their 2016 EP Let’s Plan a Robbery. Formed at a drag show in Brooklyn in 2014, Acid Dad has been one of the most talked about bands in the New York punk scene in recent years thanks to their explosive psychedelic live performances. The 11-track debut album arrives to carry those infectious performances to your home! It looks like Consequence of Sound agrees with us stating “Acid Dad balance dynamic melodies and unhinged punk with such precision that you’ll never find yourself bored.” Acid Dad is going to be performing at SXSW as well as Mercury Lounge in New York City on April 20th. Stream “2Ci” below and don’t forget to add the album into your pre-game playlist here.

What is SXSW missing? Absolutely nothing. Want to catch an exclusive screening, find the next big artists, learn about the next steps in technology or just bar hop with friends? Well, you can do all that and more. The Orchard's attendees each had differe...