Stay Home Fest Day 2 will bring artists from across the globe right to your phone screens. Artists for Day 2 include exciting acts like Ginger Jamie, Shaqdi, Dora, hollowgang, Smash Into Pieces, and Darling West. The Orchard’s second live stream festival will take place on Friday, April 17 and will kick off at 11AM ET. Be sure to tune in!

Ginger Jamie, a former member of the UK boyband Exposure, grew his online following by posting covers and live performances on Instagram. This acquired popularity allowed him to sell out multiple venues without releasing any music. Ginger Jamie has debuted as a solo artist with “Goodbye To Love” and has new music coming in the next few months.

Listen to “Goodbye To Love” here

Shaqdi is a London-based Swedish R&B singer, songwriter, and producer that doesn’t play by the rules of the genre. She blends future-soul, electronic notes, and R&B into her own unique sound. Shaqdi released her EP Colorless late last year and has started 2020 by releasing a stream of new music with plenty more to come.

Upcoming Spanish sensation DORA has begun to make her mark on the pop/indie-electronic world at just fifteen years old. A natural talent since her childhood, DORA was creating versions of songs she loved at nine and uploading covers to YouTube at eleven. The singer has released her new single “Stay,” a beautiful song about creating your own world with what you have at the moment.

Swedish pop-punk boyband hollowgang began their career by releasing their debut single “birthday” on Spotify, Soundcloud, and YouTube in 2018. Since then, the group has performed at the legendary Jazz Club Nefertiti and the prestigious club Yaki-Da. hollowgang has released “hate to see you smile,” a high-energy pop-punk-rap banger co-written by Nikolai Potthoff and Tobias Kuhn.

Listen to “hate to see you smile” here

Scandinavian alternative rock band Smash Into Pieces have become one of the fastest rising bands to date. After releasing four albums and garnering over 100 million streams on Spotify alone, the band has kicked off 2020 with a stream of singles including “MAD WORLD,” “God Sent & All Eyes On You,” and “Everything They S4Y.” Smash Into Pieces’ electronic/rock sound will be heard all over the world later this year, with the release of the band’s fifth album.

Listen to “Everything They S4Y” here

Norwegian Cosmic Folk/Americana (or Nordicana) group Darling West has been stunning crowds all over the world with their upbeat pop-leaning songs and tear-jerker ballads. The band released their fourth album We’ll Never Know Unless We Try earlier this year, a project that connects their home in Norway to the time they spent in the United States.

Listen to We’ll Never Know Unless We Try here

Tune into The Orchard’s Stay Home Fest Day 2 live on our Instagram starting at 11AM ET! 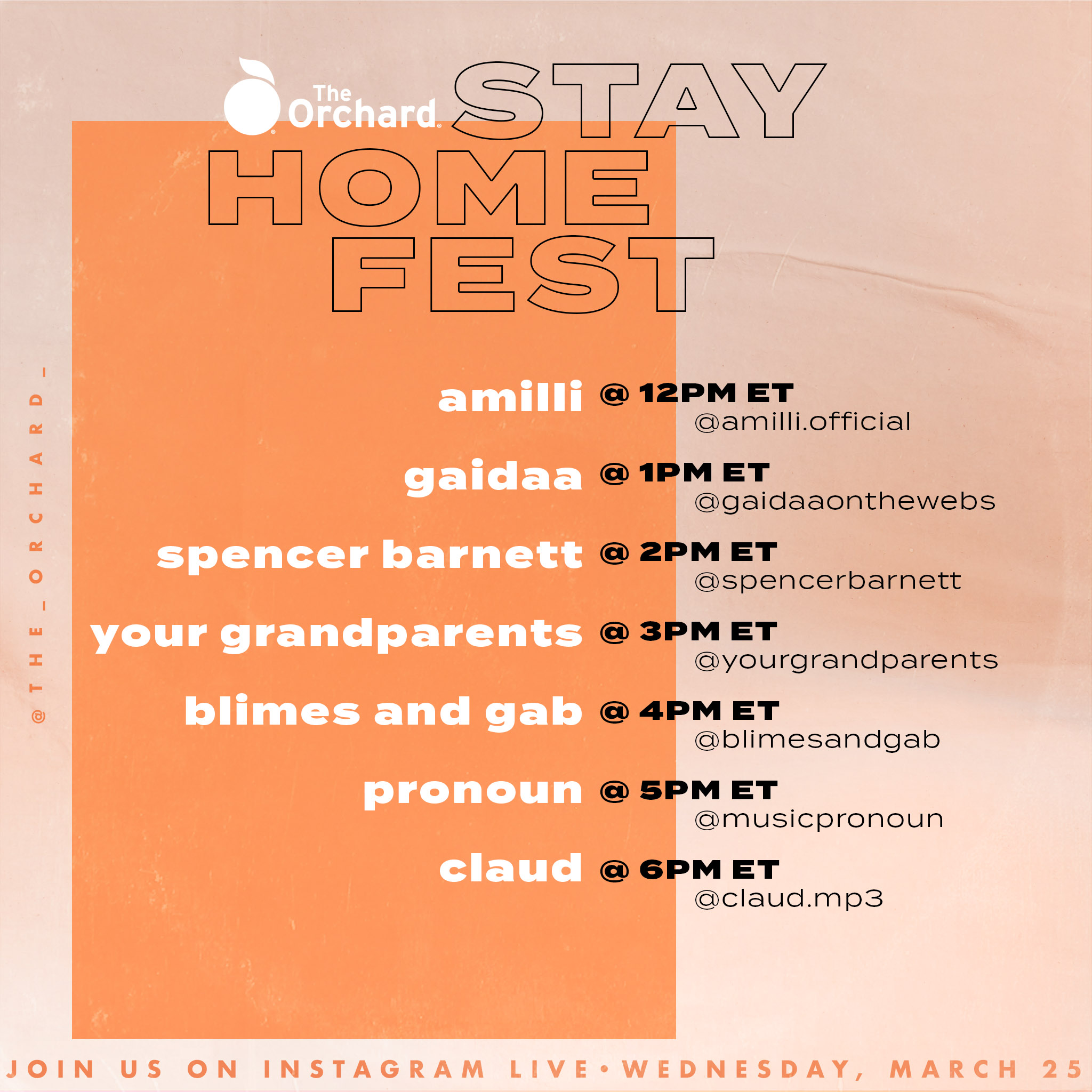