Out Today by The Orchard: Will Hoge, Frankie Rose & More 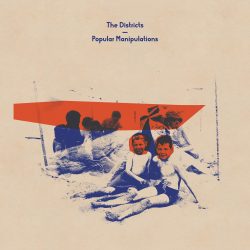 The stages of New York are packed as we head into another week of summer concerts. But before you disappear into your weekend stupor of sunny brunching and grassy picnics, we have some new music that could make your weekend even brighter. Whether you’d prefer to relax and chill, rodeo or rock out there is a new album now available for your listening pleasure. This Friday debuts new wave noise from Frankie Rose, a solid dose of country courtesy of Will Hoge and alternative jams from your favorites, The Districts.

Fresh from the stages of Lollapalooza, Pennsylvania band The Districts is back with a third studio album, Popular Manipulation. The Districts continue to capture raw emotion and energy through their unique indie rock sound. Having recorded with world renowned producer John Congleton, who’s works include Lana Del Rey and The Roots, the band use this album to expand their reflective melodies and lyrics. Band member Rob Grote stated in an interview that the band had more confidence in themselves while creating this new piece and really dug into their talents as artists to create music that embodies their experiences. You can get Popular Manipulation now and watch their music video for “If Before I Wake” below.

New York musician Frankie Rose is back with a new album titled Cage Tropical growing her signature synth pop sound and expanding it to new bounds. This latest project is a symphony of floaty melodies using Frankie’s synth focused style and adding new layers that take the listener on an ethereal journey through space. Take a listen to Cage Tropical and check out her music video for “Red Museum” below.

Grammy nominated artist Will Hoge slows down a notch with his album Anchors. The Nashville born folk country singer returns with a thoughtful record that reflects upon his experience of falling in and out of love with music and his rediscovery of his artistic passion. The album travels from slower ballads, during which Hoge gets personal, to high energy country rock tracks with monstrous guitar solos and an upbeat tempos. Tune in below for Will Hoge’s performance of “Young As We Will Ever Be” and listen to the full album here.