Out Today by The Orchard: Gaidaa, Lupe Fiasco, & Wojtek

Netherlands-raised Sudanese R&B/Soul singer and songwriter Gaidaa released her stunning debut EP, Overture. On lead single “Falling Higher,” a steady beat simmers as Gaidaa’s voice stretches from laidback verses into a falsetto-driven hook illuminating the scope of her signature style and laying the foundation for her debut project. The soulful single received immediate praise from key tastemakers like COLORS who described it as “groove-inflected and magical” and Pitchfork who proclaimed the song, “immediately establishes an irresistible groove.” On the release of her debut EP, Gaidaa shares, “To me ‘Overture’ is not only my introduction to the world, but essentially my reintroduction to myself, my rediscovery and re-creation of Gaidaa. It’s about realizing that we are far more complex and hold more depth than we think. Overture is the foundation to something more substantial; the beginning of everything that is yet to come and yet to be learned. Gaidaa meeting Gaidaa.”

Multi-platinum, 12-time GRAMMY Award nominee and 2008 GRAMMY winner Lupe Fiasco has released his 8th studio project, HOUSE. The EP was also produced by Kaelin Ellis, who Lupe met and connected with on Twitter during quarantine. Within only one month after meeting online, the two artists created HOUSE, named after their limited surroundings… their houses. The lead single “SHOES” features narration from international fashion designer and entrepreneur Virgil Abloh (Louis Vuitton, Off White). Abloh’s narration discusses a show design inspired by the death of Ahmaud Arbery, that occurred in February in the state of Georgia. The release truly encapsulates the atmosphere of 2020, from reflective narration to beats created through social distance. HOUSE is out everywhere now via 1st and 15th Too.

Self-taught virtuoso WOJTEK has released an album to accompany a worldwide movement. The Polish-born and Berlin-based musician and pianist pledged to remain carbon neutral in every step of the process for his new album Atmosphere – from recording to release. Speaking about the idea behind the new album, Wojtek said, “Each phase of music production generates carbon emissions into the atmosphere and I am fully aware of this. My mission was to write, record and produce a carbon neutral album. Fortunately, I was able to record Golden and the rest of the album in Baltic Studio in London – they use a renewable energy provider and therefore, I was able to ensure that fewer kilos of CO2 were released into the atmosphere.” Wojtek hopes that Atmosphere will inspire people to take actions in their daily lives, provoke discussion within the music business to seek new, more empowering, and sustainable business models that respect planetary boundaries. The album features samples from the world around him, combining contemporary classical music with techno sounds. Listen to the 9-track carbon neutral album Atmosphere, out now. 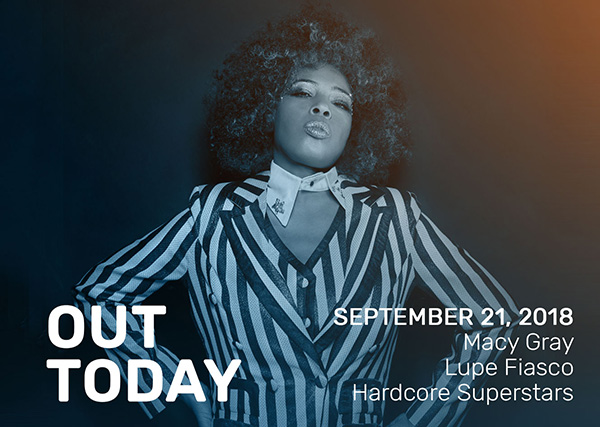 Out Today by The Orchard: Lupe Fiasco, Macy Gray & More

Leaves may be starting to fall, but great music is arising this week. Check out our new releases that will put you in the perfect mood to stroll down the color changing streets. We’ve got sultry jazz pop from your favorite 90's goddess, Nordic rock metal fu...