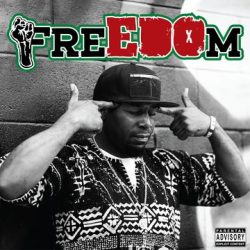 EDO.G (Every Day Other Girls) hailing from Humboldt Avenue (“The Boldt”) in Roxbury, Massachusetts has returned to bless us with his new project FreEDOm via Red Line Music Distribution, Inc.

Now, lets take a second and think back. The first time the masses heard of Edo. G was with the group Da Bulldogs (Black United Leaders Living Directly On Grooving Sounds) which was the first Boston hip hop act to be signed to a major deal via PWL America/Mercury Records back in 1989.

Their first project Life of a Kid in the Ghetto was released on April 30, 1991 and scanned close to 600 thousand units. It contained the perennial classic “I Got To Have It” produced by Joe Mansfield. This song went to number one on the Billboard Rap Singles chart, and the accompanying video received heavy rotation on BET’s Rap City, MTV’s Yo! MTV Raps and New York City’s beloved Video Music Box hosted by VJ Ralph McDaniels. The group also performed the track on Don Cornelius’s revered show Soul Train. Much of the production on the album was handled by the Awesome Two, Teddy Ted and Special K who hosted the Awesome Two show on radio 105.9 WHBI in New York. Other standout tracks from the release included the introspective “Be A Father To Your Child”, “Bug-A-Boo” and “I’m Different.” The group put out an additional album in 1993 called Roxbury 02119 which included tracks “Love Comes And Goes”and “Skinny Dip (Got It Goin’ On).”

After the group disbanded in 1993, Edo.G began his solo career independently and released his first project, The Truth Hurts, in 2000. This special album was led off by the critically acclaimed DJ Premier of Gang Starr, producing the hit “Sayin’ Somethin.” Other heaters on the release were “Situations” featuring and produced by DJ Pete Rock of Pete Rock & CL Smooth, “On Dogz” with Free, the original cohost of BET’s 106th and Park, “Nothing Ventured” with Black Thought, and “Big Business” with Tajai of Souls Of Mischief.

In addition to Edo.’s solo albums and EP(s), he did collaboration projects that received widespread recognition from hip hop heads worldwide. Edo. was one third of the group Special Teamz along with Jaysaun formerly of The Kreators and Slaine. The group put out a mixtape and their only full-length release entitled Stereotypez in 2007 with Brooklyn based hip hop label Duck Down Records. This album had a wide range of features and production from the likes of Pete Rock on “Boston To Bucktown” featuring Buckshot of Black Moon and Sean Price of Heltah Skeltah, Primo on “Main Event”, and Ill Bill on the title track “Stereotypez.”

Edo. continued to collaborate, working with DJ Pete Rock on My Own Worst Enemy and partnering with Masta Ace to release Arts and Entertainment in 2009 on Ace’s M3 Records. This masterpiece contained bangers including “A’s & E’s” with Marsha Ambrosius of Floetry, “Little Young” produced by M-Phazes, and “Pass The Mic” with KRS-One. This album was a concept project filled with entertaining and insightful interludes.

We now fast forward to 2017 with the release of FreEDOm, Edo. G’s 15th studio album. This project is helmed by up and coming producers and features some familiar acts. The lead single “Boom” produced by Sir Williams discusses the perils of gun violence and its effect on victims, families, and communities. Watch, below:

On the track “She Had So Much Soul” produced by Geronimo X, Edo. G has a lovely online interplay with a girl we all know and love (see if you can name the unlisted feature!). Edo. links back up with Da Bulldogs on “It Is” produced by Kelz With Tha Heat and reforms the dynamo duo with Masta Ace on “Smoke.” Producer Torchbars provides the soundscape on the song “Beast,” the title track “FreEDOm,”and the deeply impactful “Hate” featuring Marcela Cruz  and Ethan Black. Catch the most recent video for “Beast,” below.

You can find FreEDOm on your preferred service, now. As an additional treat, the physical version of the release contains a DVD entitled “I Got To Have It” which chronicles Edo. G’s entire career documenting the highs and lows that he experienced in the music industry both at home and abroad. FreEDOm is a must for fans of hip hop no matter what coast one emanates from, and yes, you got to have it, too!

Rejoice: After several silent years, deathcore pioneer Despised Icon is finally poised to release its new album Beast this July. Long-time fans of the Montreal-based band will be happy to know that Beast stays true to the heavy sound of the group's early al...