The industry has its own ways of creating big stars and big hits. Producers try to get their musicians to the top using everything in their arsenal and sometimes, it works. But sometimes, a couple of happy accidents work wonders to drive someone’s inconspicuous tune to the forefront. Propelled by well-written lyrics and the proper production and marketing management, these works are unstoppable.

Take the Turkish rapping duo Eypio and Burak King‘s song,”Günah Benim.” As of today, the music video has been viewed more than 33 million times since it was uploaded to YouTube on December 2015. The view count keeps growing at an incredible pace of approximately 1 million views a day and the song is at the top of the local iTunes, Apple Music and Spotify charts, making it an all around hit. “Günah Benim” is Eypio’s second single from 3 Adım Müzik, one of the biggest and widest ranging record labels in Turkey. Although he is already well recognized by the local hip hop and rap community, this level of spotlight is something new for him.

It seems the specific date the video was published, December 28th, had an igniting effect on Eypio’s and the song’s popularity, given its proximity to New Year’s Eve. When it came to fans sharing the video, the second line of the chorus “Bir başına girdim yılbaşına” was an easy pick and an incentive at the same time. The phrase translates to: “I entered the New Year all by myself.” Though lonesome Eypio and Burak King may sound, the timing of the release and lyrics of the song worked together to jumpstart “Günah Benim”’s journey and earn the rappers more friends than they could have ever wished for to spend the next New Year’s Eve.

What made the song gain even more popularity is another story. Four months after its release, the music video already had more than 5 million views. Fans and musicians all around Turkey were uploading their own covers and versions and the song got a decent amount of recognition from the industry as well as the fans. Furthermore, “Günah Benim” became a trending topic on Scorp (a local Vine-like app which periodically sets topics on which users can post 15-second videos), which increased the song’s visibility yet again. On April 29th, one particular home-recorded cover of the song by Feride Hilal Akın made its way to YouTube. In less than a month, it reached more than 7 million views. 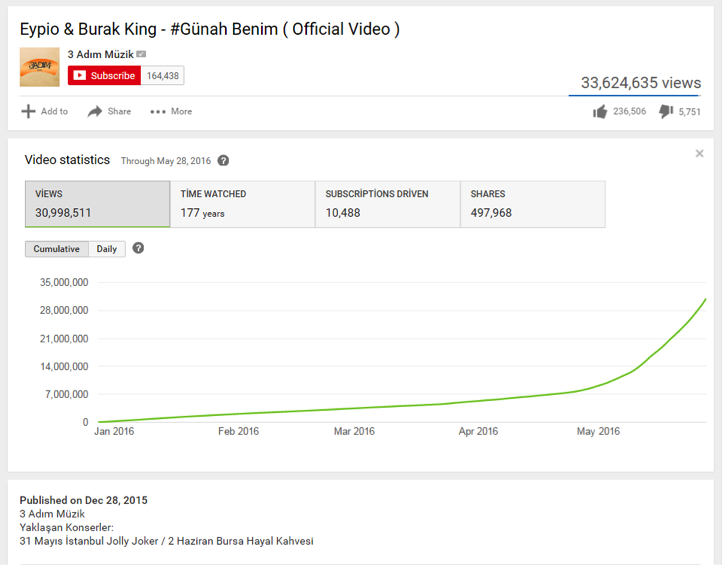 What happened next was a textbook case of the reproduction elevating the original. Eypio & Burak King’s original “Günah Benim” skyrocketed. Note the dramatic spike in the Views graph above at the beginning of May — a rather obvious connection. Add to that 3 Adım Müzik‘s clever use of YouTube Cards to showcase their content on the cover and redirect viewers to the original video and you have a successful cross-promotional tactic that immensely contributes to the artist’s success.

Now both label and artist are looking forward to riding this popularity wave to promote the upcoming Eypio release in the next couple of months. We are excited to see if 3 Adım and Eypio will come up with a bigger hit than “Günah Benim” in the new release. Let’s hope so!