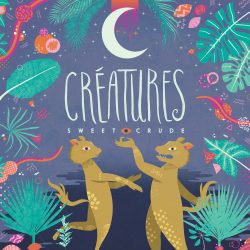 Welcome Freeloaders, to another week of your favorite releases. As you slowly climb out of your chocolate coma and strive to keep your flowers in bloom, take a moment to listen to this weeks latest sounds.

Sweet Crude‘s newest track “Isle Dans Le Mer” kicks off our weekend with a joyous French theme song you never knew you were craving. Translated to “Island in the Sea,” this single is a refreshing jaunt on a summer day in a far-away paradise. With a catchy sing-a-long hook and liberating group vocals, Sweet Crude will definitely get you moving with this wildly vivacious track.

Charles Fauna tones it down a notch with his relatable smooth-jam “Hypnosis.” A perfect mixture of pop and electronica, “Hypnosis” is an contemplative track discussing self-realization. Released on Valentine’s Day, the simple keyboards, vocals and steady beat put you in a hypnotic trance aligned with the theme. Depending on your mood, the interpretive song can either get your dancing or having a long chat with your inner-self.

“Love Love Love” rejuvenates the spirit of blues and soul in a most positive way. This Valentine’s video release emphasizes the power of music and love to brighten your spirits. With soulful clapping, strong base lines and harmonica solos, you can bet this song will lift you up and have you feeling the love. The raw but clean sound brings an even warmer feel as Steve Strongman shares his soul and gives you a hug with this unifying track.

King Woman: “Hierophant” track premiere via clryvnt
Created in the Image of Suffering out February 24 on Relapse Records

Quelle Chris: “Birthdaze” (prod. Swarvy) video premiere via Brooklyn Vegan
Being You Is Great, I Wish I Could Be You More Often out February 10th via Mello Music Group

Out Today by The Orchard: Sweet Crude, The Last Magnificent & More

Hey everybody, spring is now in full swing and you know what that means: tons of new releases. That's right, as bands gear up for festival circuits and summer tours, good music is popping up left and right. We got some superb stuff for you this week, with n...